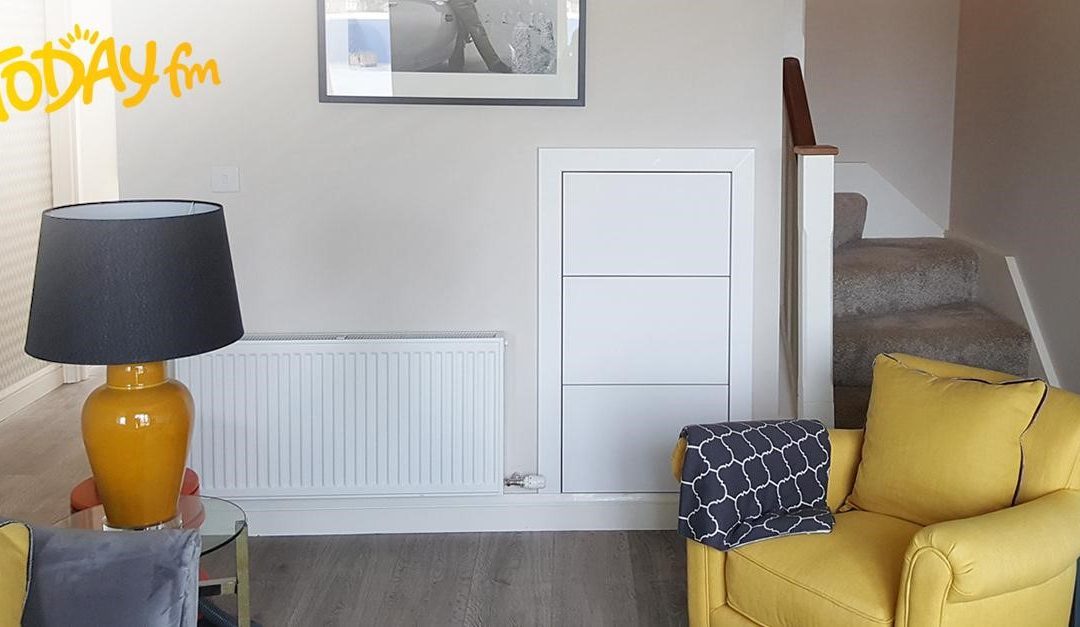 Clever Closet CEO Paul Jacob was delighted to appear on Today FM’s Sunday Business Show recently. Speaking with Conall O’ Morain, Paul discussed all aspects of the company from its establishment in 2011 to becoming the leading under stairs storage specialist in the UK and Ireland. The interview gives a great insight into the history of the business as well as future expansion plans, and covers a lot of ground including our design patents, awards, partnerships with leading housing developers across the UK and Ireland, television appearances and much more.

We have provided detailed excerpts from the interview below. If you would like to hear the interview in full, just click the following link to hear the podcast! https://www.todayfm.com/podcasts/86574/Unlock-Hidden-Space-with-Smart-Storage

Conall: “Many a fine business is started in the attic or bedroom, but a very fine business started under the stairs. It is Smart Storage who were tiny when they last visited us on the Sunday Business Show but who now employ a very impressive 50 people here and in the UK, and they’ve just won a Business All-Star Medium Business Award…And the winner is….Smart Storage CEO Paul Jacob. Paul, tell me about you and the business”.

Paul: “Yeah, I was only saying that our first time ever on radio, the first time we ever pitched the business was with Ian Dempsey back in 2011 when we just started out and he did a little thing called ‘Show your Business’ at the time. We had a pitch with him early in the morning, and he kicked us off and got us going”.

Conall: “And because I remember your story – at that stage you were out of work, this was all just an ‘I’m out of work, I better do something kind of thing’”.

Paul: “Yeah. Well I had a construction business and obviously 2008 – 2011 wasn’t really a good time, no! So, in 2010 I was out of work – my business had shut down and I was looking for other ideas to do. The first unit we actually put in our own house. I have two daughters and had a growing shoe crisis at home, chaos at the time. We live in a semi-d”.

Paul: “And, actually, it’s still a growing shoe crisis to be honest with you!”

Paul: “So, we live in a semi detached house like everybody else and we had that wedge of space left over. So I was cleaning out underneath the staircase and thought there must be a better way of doing this. We designed the first unit for there and put it in. The business kicked off from there. We pitched to Ian at that time, we brought us on the radio. Business rolled on from there and here we are today, employing fifty people”.

Conall: “But you also have been on, besides Dragon’s Den, you’ve been on other television programmes as well. There’s one of them Peter Andre’s 60 Minute Makeover. Gotta ask you – tabloid moment – what is Peter Andre like? Did you actually meet him?”

Paul: “Yeah we did one of his shows with him in the UK”.

Conall: “So he’s your bestie then?”

Paul: “Yeah, we spent a lot of time together! He’s good fun! Sarah Beeny actually was probably the best that we’ve worked with, she’s really really good. We’ve worked a couple of times on her shows and it really promoted the product in the UK, it got us really know out there”.

Conall: “Better tell the world what the product is. It’s gorgeous”.

Paul: “So basically we provide an under stairs storage system that fits under every staircase. It’s a modular unit that will fit beneath every staircase. So even the standard semi detached house that has the bathroom underneath the stairs, the wedge of space that’s leftover from that, we have a unit that slides beneath there that will store your vacuum cleaner, your shoes, your school bags, all that kind of stuff and it just folds away neatly”.

Conall: “You also have it registered or is it patented? That must have been difficult tone to get”.

Paul: “Yes, it did take a bit of work. We have a European Design Patent. We actually have a US and Canadian one, which we’ve gotten in the last 12 months. And so, it’s the design that’s registered”.

Conall: “And you have ambitions. You did say to me the US is on your radar. But not just yet. You’ve got other places you want to get to”.

Paul: “We supply at the moment across Ireland and the UK. We’re very much business to consumer so we sell directly to the consumer. In the last year, we’ve actually developed a business to business side where we’re dealing with a lot of large developers in the UK. We’re providing our units as flat pack to them and they’re fitting the units into new housing developments as standard”.

Conall: “What about the Irish guys supporting you?”

Paul: “We’re working with some of them as well at the moment. I suppose we’ve got a lot of traction in the UK. Some of the big guys over there, the likes of Red Row who would build 5,000 units a year, they’re talking to us. We’ve just done a deal with another company in Northern Ireland in the last week, they’re taking 400 units from us. That’s very much our business to business model which we will expand across into Europe and then into the states”.

Conall: “It’s The Netherlands I think that’s in your sights next”?

Paul: “We’ve got Ireland and the UK up and running for the last number of years. We’ll expand that out. Now we’re looking at Holland. Holland is the size of Munster, it’s 16 million people. Once you move outside Amsterdam, it’s all suburban homes again”.

Conall: “And they’re all very tight on space”.

Paul: “Exactly. The house sizes are quite small, and they’ve also got a very high home ownership rate. That’s sort of the market we’d be looking for, those are the key aspects”.

Conall: “The future therefore is looking pretty bright. You’ve got 50 employees at the moment, how many will you looking at in the next 12 months?”

Paul: “We’re expanding all the time. We’re looking at opening three new hubs in the UK. We have 6 bases in the UK at the moment and three bases in Ireland. So we work out of Dublin, we’ve another base in Cork, Athlone, we’re going to open another base down in in Limerick.

We’ve got Manchester, Bristol, Coventry and three around the London area. Then we’re going to open two more bases there and expand the business to business side of it, getting more developers on board, both Irish and English”.

Conall: “Well hopefully now if Cairn homes and all the other fellows are listening they better check in with you…Thank you so much Paul for joining us on the Sunday Business Show. I hope you’ll be back again when you have 100! You won’t be All Star Medium Business of the Year, you’ll be the All-Star Big Business of the Year!”